"There is no difference between time and any of the three dimensions of space except that our consciousness moves along it… Scientific people… know very well that time is only a kind of space."
- HG Wells (from The Time Machine)
The theory of time travel is more correctly described as “spacetime travel”. Because just traveling to a set time and not specifying a physical coordinate and ignoring the rotation of the earth around the sun, could have disastrous results.
For example, if one were to leave the timeline on a set date, planning to return to the same physical place three weeks earlier, the earth would be in a different place in it’s rotation they would be reentering the timeline in the middle of space and not on the earth itself.
But if one left the timeline and I had a specific spacetime (time and physical coordinates) to “land” in, then the rotation of the earth would not be an issue. 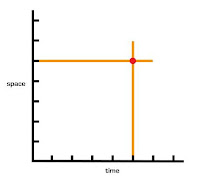 I wonder if the end/opening of the wormhole wouldn't be affected by the earth's gravity the same way the moon is.

So it would always be pulled back to earth's surface.

At least I like to hope that's the way it is.