There are many paradoxes that surface when considering the possibilities of traveling through time. The most common is called the Grandfather Paradox.

This paradox states that one cannot go into the past and kill his own grandfather because he would then cease to exist and therefore would never have been alive in order to time travel back.

Besides the obvious literal problem with causing the death of one’s ancestor, also tied to this paradox is that one cannot go back to prevent something from happening because then it never would have happened and that person would not have needed to travel back to prevent it.
If this paradox is taken one step further, one cannot really change anything when traveling back in time.

So considering the limitations presented in the Granfather Paradox, one cannot change history through time travel.

For example, let’s say one were to travel back in time to prevent the death of R&B singer Aaliyah in 2001 - so that person goes back, stops her from getting on to the plane and she lives. If the timeline was continual, then seven years in to the future, the time traveler would not have the need to go back in time because now she didn’t really die.

But the theory of Diverging Timelines (also called Branch Theory) explains that if you were to go back in time and change an event, then a new timeline would be created, which would run parallel to the original timeline you left from.

So, if you consider the illustration below, the black line is the original timeline where Aaliyah dies. The red line shows the path of travel backward through time. Once history has been changed (Aaliyah saved), a new timeline is created (orange line). 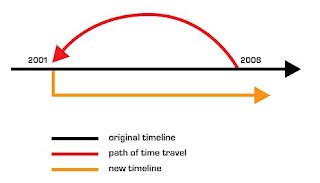 Therefore if the time traveler were to then go back from where he or she originally left from, they would no longer be traveling between two points in time, but they would be moving between two parallel universes (from the black timeline to the orange timeline). And when they arrived in their native timeline, Aaliyah would still be dead.
Posted by Matsby at 12:51 PM