Ultimate Fantastic Four wasn't a great series, but it had it's moments. My favorite storyline in that series was called President Thor and contains a story where they go back in time and stop the event which led to them becoming the Fantastic Four. In issue 27 (written by Mark Millar with art by Greg Land), they introduce some giant cosmic spiders that Reed Richards calls "Argiopes" whose "function in spacetime" is to devour "threats to the reality fabric" such as the Reed from the future touching the Reed from the past. 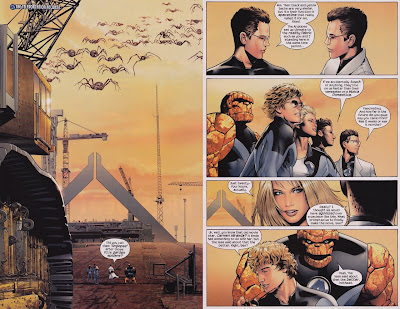 It's an interesting idea of nature having its own way of protecting the continuum.
Posted by Matsby at 10:27 AM

That's pretty interesting. Makes me want to read the comics.
There are theories out there dealing with the grandfather paradox saying that the universe itself would stop anything from the future changing (killing your grandparents) anything in the past. This idea seems to play off of that in a more.. scientific way. I like it.

Even though it might mean our doom, I don't think I could resist touching myself, just to see what would happen.

Nor, I bet, would Matsby.