City on the Edge of Forever

Last year Matsby asked me to write up a review of one of my favourite Star Trek episodes. Now I've finally gotten around to it, which is actually quite soon by his standards.

This is a hard review to write, because "City on the Edge of Forever" is one of the four or five Star Trek episodes that bring a few tears to my eyes. Although, in fairness, "Spock's Brain" probably shouldn't count because I cried because it was so bad.

The story begins when Dr. McCoy "accidentally" drugs himself, and has a bad trip. He beams off the ship to the mysterious planet below, and Captain Kirk and Mr. Spock chase after him, bringing along two red shirts (wise), Scottie, and, for absolutely zero reason, Lieutenant Uhura.

While searching for Dr. McCoy, they stumble upon something shiny and completely forget about their friend and his potentially fatal condition. 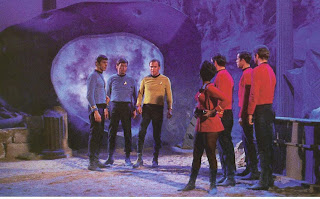 Turns out that it's a gateway into Earth's past, into which druggie Dr. McCoy suddenly leaps. Moments later the Enterprise disappears because of something McCoy did in the past. Only Kirk, Spock, and the others are safe because they're on the planet protected by the gateway (and not wearing red shirts). Everyone else, including all of Star Fleet, apparently ceases to exist.

I know this seems like the most amazing device, and it probably gets destroyed at the end of the episode, right? Wrong. The time portal works just fine, it's just one of those amazingly powerful devices that we never hear from again. There are countless occasions in future episodes and movies where time portals, mind-controlling bugs, Genesis weapons, and countless other discoveries would have been invaluable, but are completely forgotten. To me, it's kind of a running gag.

Anyway, Spock and Kirk decide go back to try to find McCoy, figure out what he did to screw up the future, and stop him. And maybe play the stock market a little.

Turns out that McCoy went back to America, in the 1930s. One of the first rules of time travel is that you never wind up in Africa, or Asia, or some rinky-dink Pacific island, nope you always wind up in New York.

The first person McCoy meets, before passing out, is some random homeless guy. For no particular reason the homeless guy steals McCoy's phaser and accidentally vaporizes himself. Turns out this homeless guy had no more effect on history than he does the story. Moving on ... 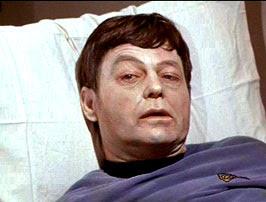 So instead he hooks it up to his tricorder so he can help locate McCoy, which is pretty amazing because I can't even find a cable that will hook my old camera up to the computer and it's only ten years old.

Eventually, with Spock's primitive version of Google or something, we learn that McCoy saved the life of a war protesting pacifist. The pacifist was a wonderful person, but convinced Americans not to enter World War II until it was too late, and the extra time that bought the Nazis was enough for them to get the Atomic bomb, and presumably destroy the planet.

So far, the morals of the story include:
1. Homeless people are of no consequence
2. Protesting war is BAD!

Back to the story. Turns out that Captain Kirk accidentally fell in love with the pacifist (relax, she's a woman, and played by Joan Collins actually), and is hesitant to let her die. So far there have been more accidents in this one episode that in an entire season of Three's Company. 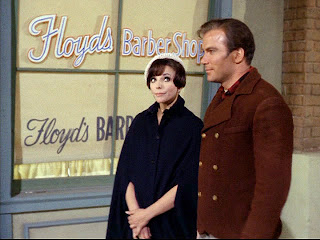 Finally they find McCoy, and in a very gripping scene Kirk is forced to stop McCoy from saving her life. McCoy is furious that Kirk stopped him, either because he didn't know the whole story, or because he was secretly a Nazi - this was never revealed.

Fortunately letting the war protester die restored their future, and all was well. But since they didn't know how to get back to their own time, they were stranded on Earth where they eventually wound up meeting up with this young man named Gene Roddenberry. They tell him about the future (their past) and eventually help him write a TV series called "Star Trek."

The end.
Posted by Robert Vollman at 5:50 PM

This is a great episode. I just re-watched it before reading this post. You are totally right about the two morals of the story being protesting war is bad and homeless people are of no consequence, Protesting war is BAD!

The former is especially interesting because the whole episode seems to be about how Edith living or dying will change the entire course of Earth's history. - But then when the bum dies, it doesn't effect any of us in any way.

My favorite line is when a cop stops Kirk and Spock for stealing and the first thing Kirk thinks he needs to do is explain why Spock looks weird. And his explanation is: "My friend is obviously Chinese."