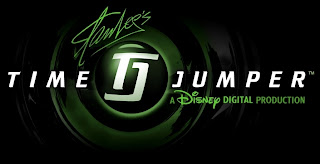 Produced by Disney? Nice.
Created by Stan Lee? Awesome.
About a time travel? Now we're talking!
BUT it turns out this digital comic available from iTunes was kind of a disappointment.
The basic setup is pretty descent. I like that the time travel device is a handheld machine that looks like an old Gameboy and it's kind of cool that the machine can only be used by someone with his DNA. The plot has a lot of potential. Good job, Mr Lee.
BUT the digital comic production was weak, even for digital comics (if there is a soundtrack including voices, then you don't need to have the words) - and the writing is somewhat cheesy (it is not written by Stan Lee - maybe it should have been).
Over all, I give it 2.5 out of 5 stars. The first episode is free on iTunes, so you can give it a try.
Posted by Matsby at 6:19 PM