Right now in the Captain America Reborn mini-series (written by Ed Brubaker with art by Bryan Hitch), Cap's consciousness is bouncing around in different times throughout his life. He is reliving events in his history and is faced with the decision of whether he should be trying to change events or not. He is confused because he doesn't understand what consequences might follow having changed history. In issue 2, he thinks "If I am really in the past... I could... no. It's too big to think about... I need Tony Stark or Reed Richards... someone who would understand this..." If only he could ask the advice of one of his genius scientist friends...
And then he ends up in his body right before he became Captain America. He knows he is about to witness the death of Doctor Erskine (the scientist who gave him his powers) and he has to decide if she should try to save his life or not - and luckily he is speaking to a genius scientist (Erskine) who can answer his question, so he asks it using the old "kill Hitler" idea... 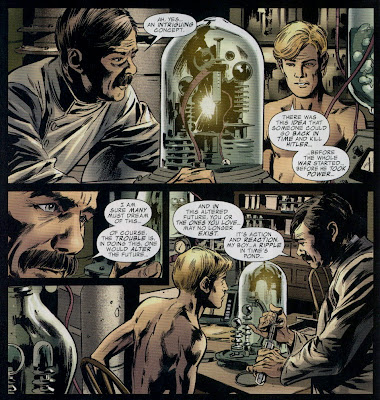 Steve Rogers (Cap): There was this idea that someone could go back in time and kill Hitler... before the whole war started. Before he took power...
Dr. Erskine: I am sure many must dream of this. Of course the trouble is in doing this, one would alter the future. And in this altered future, you or the ones you love may no longer exist. It's action and reaction, my boy... a ripple in time's pond.
He ends up heeding to the doctor's advice and watching the doctor die (again).
It's also kind of like the Star Trek episode, City On The Edge Of Tomorrow. Which Vollman should write a review of (do it Vollman!).
Posted by Matsby at 10:29 AM

City on the Edge of Tomorrow is one of four or five Star Trek episodes that bring a few tears to my eyes. (Although "Spock's Brain" probably shouldn't count because I cried because it was so bad).

Dr. McCoy accidentally goes back in time and does something that causes the entire future to not happen. Only Kirk, Spock, and a few others are safe because they're on the planet with the time machine (and not wearing red shirts), everyone else, including the Enterprise, ceases to exist.

Spock and Kirk go back to try to find McCoy, figure out what he did to screw up the future, and stop him. And maybe play the stock market a little.

It turns out that McCoy saved the life of a pacifist. That pacifist was a wonderful person, but convinced the Americans not to enter World War II until it was too late, and the Nazis got the Atomic bomb and the whole planet wound up getting destroyed.

Kirk, who had accidentally fallen in love with the pacifist (relax, she's a woman), stopped McCoy from saving her life in a very gripping scene. McCoy didn't know why Kirk stopped him, presumably because he didn't know the whole story (either that, or he was secretly a Nazi - this was never revealed).

They restored the future, but not knowing how to get back to their own time, they were stranded on Earth and wound up meeting up with this guy named Gene Roddenberry and making a TV series about the future (their past) and called it "Star Trek."

Robert, were you a fan of Deep Space Nine? What about the episode "Far Beyond the Stars"? That's sort of a time travel episode...